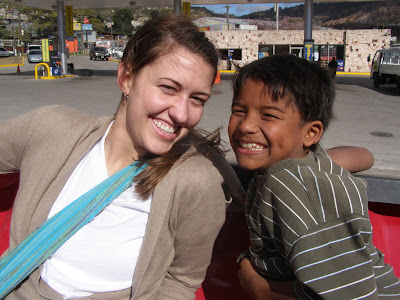 Almost exactly a year ago Colby (my best friend in the entire world) showed up at Casa unbeknown to me. She had contacted Jen and Karen to make sure someone could pick her up at the airport and then she booked her ticket. She was able to spend her spring break here with me. It was an amazing week.
About a week ago Colbs and I were discussing her plans for this years spring break. She said that although she had her classes off she still had to go to her internship because she is required to be there for so many hours. We reminisced about last year and I even asked her if I could be expecting any surprise visits. She told me that no matter how much she wanted to be here it just wasn't possible this year. She couldn't afford to be away right now. We talked about her spending time here this summer and that was enough to appease me.
Yesterday I spent the day in the city running errands and helping Jen, David, and Sam. We had a to do list that was a mile long and the day started bright and early. We all headed off in opposite directions to divide and conquer. The plan was that we would meet back up around 1 for lunch across from the airport. The morning ran smoothly and we were productive but by lunch time we found ourselves caught in more "this is Honduras" moments than we had anticipated so we finally met up with everyone else around 2:15.
As soon as I walked in we talked about the next plan of action. How much time we had to eat, who needed to go where next, how we would get everything accomplished, etc. Jen asked me if I would go order everyones food while she went to the restroom. I had no sooner turned around when a set of arms wrapped around me. Confused I looked down at the arms first. Recognizing the Cardigan sweater to be the one Colby and I bought together I could barely contain myself as I turned around.
Let's just say I made quite the scene in Church's Chicken as I squealed and jumped around. Colby had done it yet again. She had managed to keep her trip quiet and made it here to surprise me! :) So for the next week I'll be relishing in the mere proximity we have now found ourselves in. I love having her so close.
Posted by Ashley at 6:20 PM

Wow...what a amazing friend? When will I actually get to meet this wonderful person???? I think it needs to be soon. Have a wonderful, wonderful week! I have no doubt it will be the best!

Just for the record...giving "drugs" to Colby did not count!!!!!