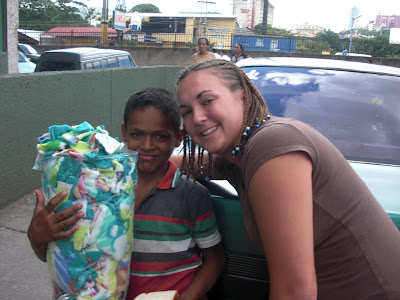 While we were at Hospital Escuela the other day I ran into a little boy named Mario. When I say ran into I mean that very literally. Unlike most little ones on the streets he wasn't standing at my door begging or trying to find food. He was simply just walking along the sidewalk as I got out of my car and I nearly hit him with the door.
I began asking him his name and making small talk. I had just bought a case of Apple Juice so I offered him a can. After thanking me he asked if he could have one for his grandma and sister. Before I knew it I found out he was 8 years old and lived with his grandma and his 6 year old sister Karen. His mom had left them to go to the states and his dad had ran out on them when Mario was really little. He went on to tell me how his father had cut off his finger. As he finished his painful story he held up his left hand to show me that he was indeed missing his pointer finger. From there I learned that he was out in front of the hospital because his sister was really sick and was on the third floor of the hospital. He was down on the street getting medicine for his sister.
We continued talking as I made him a couple of peanut butter sandwiches (from the supplies we had just bought for the dump) and dug out a couple of stuffed bears and a blanket to give to him. For whatever reason our hearts bonded quickly and I fell for a little boy who I just happened to meet. Before climbing back in the car I wrapped my arms around him and Sam and I prayed for him and his family. As we drove away he was visibly holding back the tears that were threatening to spill out.
Pray for little Mario. He is an 8 year old who, because of circumstances beyond his control, has been forced to grow up and take on the role of someone twice his age. Pray for his sister, Karen, as she lies in a hospital bed fighting to get better. Pray for their grandma who I'm sure does her very best to take care of them both. And pray that I don't ever stop meeting and falling in love with little kids that God brings into my path.
Posted by Ashley at 10:26 AM