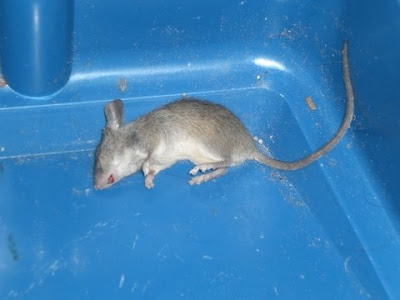 Gus Gus the Mouse, a Santa Ana Honduras resident died at approximately 9 p.m. May 11th at the young age of 1 human year. Cause of death - 3 quick waps of a broom.
Exact date of birth unknown. Gus Gus was a member of the Casa de Esperanza kitchen terrorizing club and the scare Ashley out of her socks club. He was preceded in death by his parents Gus Sr. and Gusetta as well as half of his 5,000 siblings. He was not yet married but enjoyed fraternizing with the many female rats that lived in and around Santa Ana.
There will be no formal funeral but all are free to visit him at his resting place out by the front wall.
As most of you know I've killed plenty of animals with my car... but NEVER have I even considered willingly killing an animal. However, last night that all changed. After chasing poor little Gus Gus around the kitchen for a few minutes his short life came to an end. I truly wish you all could have been flies on the wall to witness the scene as it played out. Jacob (who DID play a part in this) saw Gus Gus first and went after him. However, he intended to simply "shove" this live mouse out the door to freedom. After missing him the first time we thought all hope was lost. However....our ever so intelligent mouse friend hid for a matter of seconds before running back out into the open. I was ready for him that time and blocked him so that Jacob could get to him. After hitting him once with the end of a mop handle the stinkin mouse headed straight for my feet and it looked like he was not only going to get away but use me as his escape route. Before I could even think about what I was doing I began hopping around, squealing, and flinging the end of my broom at him. I was in the middle of the room and with nothing to jump up on I had few other options (or so I thought...simply getting out of his way never entered my mind) than to start swinging my broom!:)  I missed the first time but the second swing brought contact.....after that it was all but over.....no more Gus Gus. Afterwards Jacob decided to get sappy and made me feel guilty about killing that poor little rodent. So now I'm forced to show some remorse and provide an obituary so that all may mourn his death. :) Either way the stinkin thing is out of the house and will stop running out between my legs when I go to use the restroom in the middle of the night!
Posted by Ashley at 10:15 AM