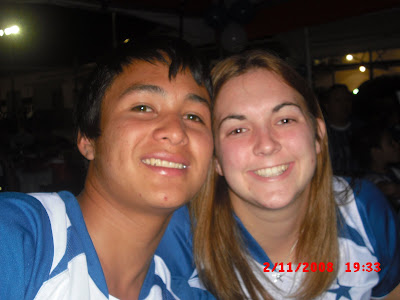 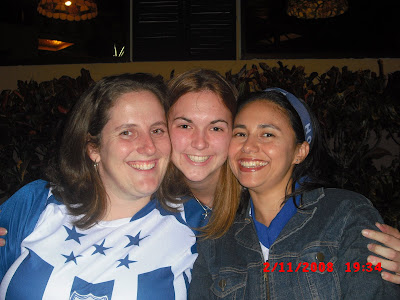 Jen, Gina, and me 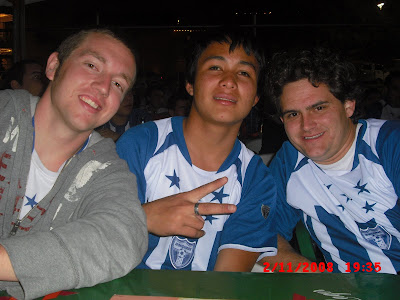 Jared, Carlos, David
This past Wednesday Honduras played Costa Rica in a huge futbol (soccer) game. I have never really watched or followed soccer before. It was one of the few sports that I had never really learned to play and therefore never really got too involved in it. Not to mention that as a whole we North Americans really don't give soccer the appreciation it deserves. Since moving to Honduras I've learned to be a huge fan of soccer...mainly Honduras soccer. I bought the jersey, watch their schedule, and heck I'm even learning a few soccer rules so that I actually know what is going on and can talk the part of a true fan.
I like sports and am competitive enough that if I pick a side to cheer for I can almost always get into it no matter what sport it is. Yet here it goes above and beyond that. On days when Honduras has a game this country goes nuts. On game days if you venture into the city you will find hundreds of people wearing jerseys. People stand in the middle of the street selling jerseys, flags, and other gear. Car hoods are draped with huge flags and flags are flown proudly from windows. We aren't talking a handful of people get excited. We are talking EVERYONE! Men, women, children...poor, rich....Hondurans, gringos........EVERYONE.
So even if I didn't already love sports I think I would love Honduras futbol. It is fun to watch an entire country come together on any one issue...even if it is sports. (in my case especially when it is sports) I mean it is hard to NOT want to get involved or fall in love with the team when it literally brings such joy and unity to this country. Plus I think I've finally found fans that would give my fellow buckeye fans a run for our money! :)
I mean lets just start with Gina. For those of you who know Gina I wish you could be with her on game day. Not only does she dress the part but she goes crazy right along with everyone else. She jumps around, claps, shouts, pounds on the table, talks to the players, (on the t.v.) and simply goes crazy. At one point she had Jen and I talked into blowing on way or another to help guide the ball in the direction we wanted it to go. Yet it wasn't enough. We ended up getting beat by Costa Rica. Yet the night was still a lot of fun. We watched it at Tony Roma's. (a restaurant in the city) So many people were there to watch the game that you had to call ahead for a reservation. On top of the seating inside the restaurant they also had set up tables under a huge tent outside...complete with speakers and 4 big screen T.V.s.
Posted by Ashley at 7:27 AM