Final shout out to Max Greuey

Max flew out yesterday. I think after being in our crazy country for a month he was ready to be home. He enjoyed his time with us but was finding that longing for home. However, before we say our final goodbye to him I thought I would take the time to update you all on some final Max stories.

Last Saturday upon Max request we headed out for the day to see a few of the sights. Well at some point in our drive we stopped to buy some strawberries from a girl along the road. She said something to us in Spanish to which Max quickly answered "Ohio." Though she had spoken in Spanish he had heard in perfect English "where do you live." We all got quite a kick out of the situation.

During his time here Max started singing for the kiddos. He sang ol' McDonald and There's a Hole in the Bottom of the ocean. No matter what song he was singing he was always getting into it no matter if it was in voice or in animal songs. It was amazing to watch. The kids were not the only ones giggling and smiling whenever he started up again! 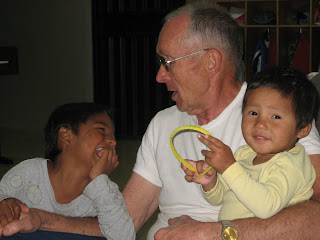 Last Friday we went into the city to the science museum Chiminike with all the kiddos. It was a long day for all of us ...especially the adults who chased, carried, and watched kids for hours. Well just toward the end of our time there we were coming out of one of the rooms when I looked over and found Max stretched out on a bench sleeping! It was so funny and thankfully for all of you I got a picture!:) 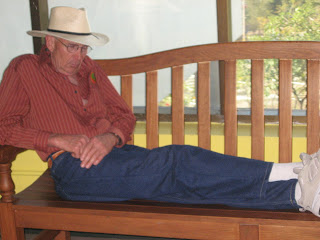 Since Max wasn't picking up on the Spanish language very quickly he decided it was best to begin speaking "in tongues." He would talk really fast in a bunch of gibberish. They weren't words simply sounds forced together in awkward ways that left the people he was attempting to more confused than if he had simply spoken in English. The funny part is he was actually quite good at it. I think he had some of them convinced he was speaking an actual language.

On Monday dad, Jen, Max and I went into town. We dropped off Max to have another massage while we ran some errands. Then returned to pick him up later. We had just left the Marriott and came to an intersection where this one old lady constantly stands begging for money. When I say old...I'm talking old! Lots of wrinkles! She came up to our window to ask for money and Max began speaking to her in English. He told her how pretty she was and asking if she wanted to go home with him. He probably said a few other things that cannot be repeated on here but you know how he is! She ended up winking at him and saying something in English. It was then that we asked if she spoke English and she told us a little bit! So funny. If you get the chance remember to ask him about his "girlfriend" as we know call her.

As much as Max was starting to long for home it was still obviously hard for him to leave these kiddos. He came over very early yesterday morning to spend some time with kids. He then pulled Fernando "his buddy" aside and gave him his hat that he had worn while being here. He gave them each a big hug and obviously was communicating so much with those embraces.

Finally let me just say that we loved having Max here. Not only was he very handy and got so much done for us but also brought a new dynamic to the place. The kids most certainly loved having him around. The boys spent hours working with him and were constantly begging to be allowed to go with him. They bonded well to him. He will be missed for sure.
Posted by Ashley at 8:43 PM