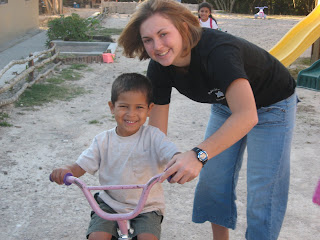 Being here gives me the priviledge to watch these kids grow. With that comes the chance to watch them like all parents watch their kids. I get to see them experience things for the first time, overcome struggles, and learn new things. Yesterday, I had one of those opportunites. The kids were playing outside and doing what kids do best...have fun. As I sat there I could see little Fernando attempting to ride a bike. Up until now he has stuck to the little bikes with training wheels. He usually isn't brave and is content to stick to what he knows. However, as I watched he tried again and again to get onto that bike. So I went to him and helped him up onto the bike and in my broken spanish gave him some helpful hints. Then like any good parent I gripped the back of the seat with one hand and the handle bars with the other and began to run with the bike keeping it steady but allowing his little legs to pedal and propel us forward. Then when I was certain he was as steady as I could get him I would let go. However, as I let go I didn't just stand and watch how far he would get...I ran along beside him with open arms ready to catch him if he fell. Oh and fall he did many times. Sometimes I was able to prevent his collision with the earths surface and other times I was only able to watch as he went crashing down. In those times I would pick him up, dust him off, give him a hug, and put him back on his bike so he could try again. Teaching a child to ride a bike is the simplest of actions but for a kid who is unsure and scared having someone there means the world. It was then that it hit me...that is what these kids need. They need someone to share the little moments with them. They need someone to be there with open arms to catch them when they fall. As this realization sunk in I realized that this is exactly what God does for us. He walks beside us with one hand on the seat and one hand on the handle bars and guides us. He holds us up. Then when he is certain that we are steady he lets go and lets us attempt to do it for ourselves. However, He doesn't just stand back and watch he walks along side us with open arms ready to catch us when we fall. At times we fall into Him and are rescued while other times we fall the opposite direction and we go crashing down. It is in these moments that He picks us up, dusts us off, and holds us in His arms. Then like any good parent he puts us back on the bike and makes us try again. I sat in awe at how a simple action like teaching a kid to ride a bike could open my eyes to the fact that my Heavenly Father is doing the same simple action. And I definitely need Him to be doing it because I like Fernando have not mastered staying up on the bike. I often fall and it is the arms that rescue me every time. I am thankful that He is there running along side me and I rest in that calm assurance. Little Fernando never completely mastered riding that bike but in the days to come I know he will. He gets better and goes farther with each time. He learns so much with each fall. Just as you and I learn from our own crashes. One of these days Fernando will be able to pedal a lot longer and farther than I can run and I will be unable to follow him with open arms. However, we can never out run God and that is an amazing promise.

hey hunny miss u. and ill be checking this blog religiously. .take care