God is my homeboy 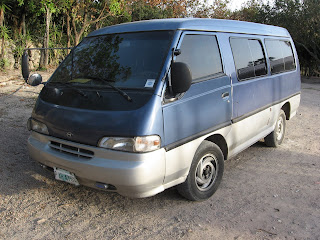 So I debated for a long time just what I was going to title this blog. It had to be something appropriate that would allow everyone to immediately grasp an idea of what lies ahead for them in the blog. Lets just say that some of the other thought up titles included The Death of Gracie, Living in Honduras 101, The 3 stooges, Always be prepared, and many others. However, no matter how appropriate the other ones seemed in the end they didn’t give enough glory to God for getting us through the past few days. Life in Honduras can be said to be a lot of things but one thing it is could never be called is boring!
It all started on Tuesday when Deborah, Jen, and I decided we were going to take advantage of our night off and head into the city for dinner and a movie. We were also going to attempt to run a few of the errands that needed done so that we wouldn’t have to spend the next day in the city running around but instead could tackle the work that needed to be done here. So we jumped into our wonderful van Gracie and headed to town. We hadn’t even gotten 10 minutes from the house when we heard a loud pop. Then about 5 minutes later our van began to smell like a smoldering camp fire and I was sad 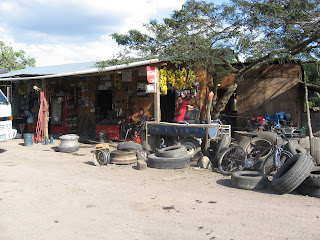 to have to tell Jen that there was smoke billowing out all around her. At this point in the trip we are thinking of all the things that it could possibly be as we pull into this tire place where there are lots of guys who know at least something about cars. Now I know what you are thinking… “oh that’s good at least they were near someone that could help them.” Wrong. Just because I say tire place and guys who know cars doesn’t mean that they will know how fix the problem.
Furthermore, let me clarify that when I say tire place we aren’t talking Firestone Tires or Michelin Tires or any other nice big commercial tire place. We are talking good ol’ fashion Honduran style tire place. Meaning it was run down. It served as a business as well as a place to lie their heads at night. (most of you know that as a house) However, beggars can’t be choosers and we have been to the place before for ot 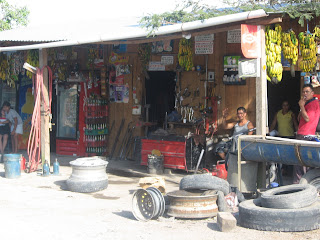 her small problems. Let’s just say we aren’t strangers to the world of broken down cars. So we move from the front seats of the van to the back seats and wait as the men begin looking at the engine, radiator, and whatever else is down there for them to look at. They then decide it would be a good idea to dump some water down with the hot radiator to cool it down faster. Of course anyone that knows anything about cars knows what happens next…. water starts boiling and popping everywhere and the steam is rolling. Needless to say we took that as our cue to step out of the van and continue our wait by the road while they finished whatever it was they were doing. By the time the men finally straighten from their hunched over positions around our car the looks on their faces said it all. We knew even before the owner of the place came to tell us that we wouldn’t be able to drive it any farther that the Gracie was in bad shape.
However, telling us that news didn’t do anything for us. I mean at this point we are 15 + minutes from home and 25+ minutes from the city. Gracie is our only means of transportation so we can’t call home for someone to come and get us. It isn’t safe for us to start walking and we have all been told that white people should never ride the public bus. To top that all off our mechanic was in the city and we had to find someway to get her in there to be worked on. So we were sort of out of options. Seeing no other choice we decided to go against their very adamant advice and attempt to get the car to the city anyway. We figured our only other option was that bus we had been warned not to ride and the closer we could get to town with Gracie the better off we would all be. So we climb back into the van and all began praying our way down the mountain.
As this is all going on we began talking about what our options were. There weren’t going to be any mechanics open at that hour of the night (it was only 6) but there was no way Gracie would make it back up the mountain. So our options were starting to look like 1. Stay with the Kluges or 2. Get a hotel room. The first option might have been the better options had it not involved Gracie having to climb the mountain on the other side of town. So as we were getting to the outskirts of town we began to smell that funny burning scent again and lets just say we weren’t in a part of town that you wanted to be breaking down in at any time of the day let alone the evening hours. We began to pray even more fiercely and that we would just make it to the Marriott which was in a safe part of town. As we were passing the Marriott we saw a tour bus out front and Jen thought it would be best to at least go in and check if they had rooms available for us to even consider as an option.
We had no sooner pulled into the underground parking garage when Gracie decided she couldn’t move any farther. She was dead for good this time. Since we couldn’t just leave her in the middle of the road Deborah and I climbed out and began pushing the van. Let me just paint you an even better picture…2 white girls standing behind a big ol’ 15 passenger van pushing it the rest of the way to its parking spot. Better yet Gracie decided she would get a few laughs out of the sight of us pushing her so she died with 2 wheels on one side of a speed bump and 2 tires on the other side of the speed bump. Therefore, we couldn’t just push her lightly in the direction she needed to go we had to rock her back and forth and back and forth a billion times before she finally went up and over that pesky little yellow bump. 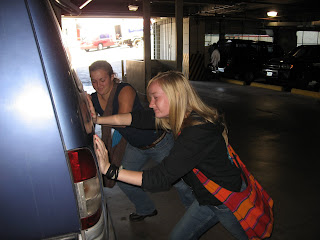 This is by no means the end of our adventure but I will have to tell you about the rest of the week later…so stay tuned. TO BE CONTINUED!