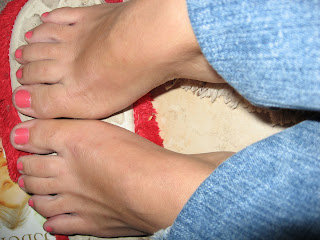 So this past week has been one for being pampered and spoiled. It all started on Tuesday when Jen and I went into the city to stay the night with Melissa and Randy and their two daughters. Let me start by saying that they have a BEAUTIFUL house with an even more gorgeous backyard. So almost as soon as we arrive Melissa informs us that there is food on the stove for us. She had kindly made us an amazing home cooked meal complete with monkey bread for dessert. So after we filled our tummies it was time to settle into there nice leather couches and fix our eyes on their big screen t.v. to watch the real reason for our visit...AMERICAN IDOL. I don't watch a lot of t.v. even while at home but I do love my American Idol and hadn't realized how much I had missed the luxury of being able to watch. So we cozied in and watched to catch our first glimpse at America's next idol. After the show was over we promptly watched two movies back to back before deciding it was time for bed. I awoke the next morning and had the privilege to shower in a real shower. Now don't get me wrong I am not complaining about the showers we have here because they are great. I'm just paying tribute to a shower that tops all the rest I have taken since getting here. After spending a little bit longer than normal in the shower I spent a little time out back in the garden catching a few moments of tranquility with my Savior. For a few moments while we were there I could easily forget that I was in Honduras and instead felt as though I were back in the states visiting old friends. When we finally left Jen and I spent the rest of the day in town running errands and such. It was a good way to start my Valentines Day and as most of you have read it just continued to get better from there.
So as if that wasn't spoiling enough today just happened to be Karen and Jen Arnold's birthday and to celebrate we took them to the Marriott for some spa treatment. I sat in an overstuffed chair with one women giving me a manicure ...and yes another women giving me a pedicure! (for those of you who don't know I HATE FEET) The thing is we..and by we I mean Jen because I don't speak enough Spanish yet.... had told them I wanted a manicure. Well they got me all set up and such for the manicure when in walks another lady with the tub to soak my feet in. Before I could do/say anything she had picked up my feet slipped off my sandals and set my feet into the warm soapy water she had brought. So I went through with it and even with my foot phobia even found myself relaxing enough to enjoy the fact that after a month of walking around with gross feet from being here my feet were once again soft and clean. Talk about a week of pampering! It was much needed though and I would say even well deserved. However, after all of it all I can think is ..."man I could never do pedicures for a living!"
Posted by Ashley at 11:20 PM