Jen CAN make all your dreams come true

If you have ever doubted that God has a sense of humor just listen to this story. We spent yesterday in the city with Gina. One of the errands Gina needed to run was to the the pet store to get fish food. Jen and I went in with her hoping that we might find a lab for sale. We have been wanting to buy a dog for here for a long time now but have had our hearts set on a lab. Well we were sad to hear they didn't have labs. Letting go of the idea of a puppy we went about the other errands we had to run. It wasn't until after lunch hours later Jen said to me again "how fun would it to be to take a puppy home today?" Agreeing I turned to Gina asking where exactly we could find a lab puppy. She told us that there was no where that she knew of that we could get one. I kid you not we hadn't gone a block farther when Jen hit the breaks and gave out a squeal because there sitting on the hood of a car along side the road were 4 labs FOR SALE. We whipped the car into the parking lot and had Gina work her magic. She was so good that after she mentioned the dog was for an orphanage the guy took 1000 Lemps off of the price! We picked out the one we wanted and headed to take Gina home. On our drive there we decided that the puppy needed a friend and so we headed back to get yet another lab. Well believe it or not in the 15 minutes we had been gone the guys had left. There was no sign of them or lab puppies anywhere...talk about fate. We had been there at the perfect moment! We continued up that road and came to the corner where there was yet another man selling dogs. Only this time it was the Cocker Spaniels. When I first arrived at Casa back in January Jen commented on the fact that she was here to make my dreams come true. Since then it has become our little joke. Well today that joke became a reality as she truly did make a dream of mine come true. I have always wanted to own a cocker spaniel....well today Jen took that dream and made it a reality by buying a 6 week old cocker spaniel. Again we convinced them to give us a discount since it was for the orphanage and we were on our way to the vet to have them both checked out. It is a very good thing we decided to take them to the vet right away because we found out they have fleas, ticks, and round worms! Not only do they have them but round worm can be passed to people and can cause you to go blind or could even move into your brain. Therefore, the vet strongly warned us to not let the dogs around the kids for the next 15 days as the meds kicked in and did their job. So we are now the proud owners of 2 puppies! I choose to believe it was God's gift to us and the kids after a particularly rough week. Not to mention that we are told that puppies (animals in general) are good for sexually abused children because it helps give them something they can love and receive love from without feeling scared. It teaches them to trust again. So I ask that you pray that these two little puppies (whom I've already become so attached to as much as the kids have) make it and become very healthy very soon. We return to the vet next week so there will be more updates for sure! Oh and we also need names so if you have any suggestions let me know....I'm getting tired of calling them puppy 1 or puppy 2! I wish you all could have shared in the joy this morning of watching those sweet little faces as they walked into the play room and saw me standing there holding not one but two puppies. It was like Christmas all over again. They squealed, clapped, jumped, and were beside themselves with joy. I might also add that the lab slept with me last night. You all will appreciate this story for sure! It took me two seconds after putting the lab in his box (aka clothes hamper) to know that he wasn't happy being there. His little whine and occasional bark let us all know he wanted out. He was only quiet when he was cuddled up next to someone. Therefore, I decided to brave it and took him to bed with me. As I lay there I kept imagining waking up in the morning with poop and pee filling my bed. So....I did what any other mother would do...I got up and grabbed a pamper. After cutting out a hole for his tale I expertly placed the pamper on his bottom like I would have one of the children! Content I climbed back into bed and curled up next to that cute little puppy. I awoke to find him curled up on my pillow with his nose ever so close to mine...breathing his little puppy morning breath into my face. However, I had a very clean and very dry bed! 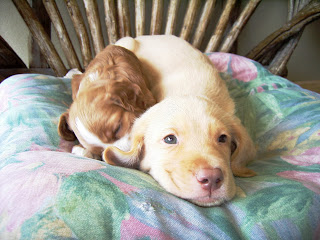 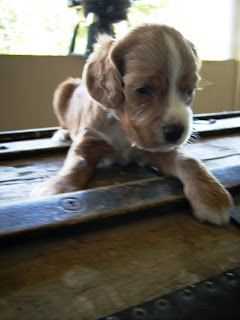 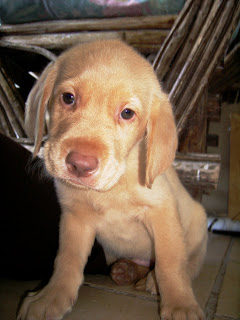