the sweetest of moments 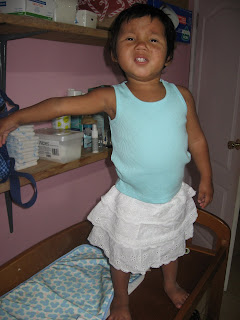 Some of the sweetest moments here catch me by surprise but stink with me as memories that can last a lifetime. Lately my days have been full of moments like that with Miss Maryuri. They are the types of moments that remind me of just why I'm here and put a smile on my face for hours. Some of these very moments came last night as I was putting the girls to bed. After getting them all settled in I curdled up with Maryuri in here bed....no small task now that she is sleeping in a toddler bed that is barely longer than her. However, she has become quite cuddly lately and I wasn't missing an opportunity to take advantage of that fact! As I lay in bed with her listening to the girls say their prayers and good nights I began to sing to them. What started out as a quiet little solo ended up as a boisterous duet because before I was even half way through my first song my voice was blending with the sweetest little bellow of my little Maryuri. Of course she didn't know the words and at 2 isn't quite able to pick up on them as we go so eventually my words became drowned out by the grunting, mumbling, and flat at animated noises coming from the little one beside me. With a smile on my face and a lifted heart I continued on with my song simply enjoying the sound of the voice that was so happy to be part of the singing. Really put into perspective the whole “make a joyful noise thing!”
It was during that same evening that I was delighted to hear that same little girl utter the words “I love you mommy.” Each evening as I say goodnight to my kiddos I always whisper I love you with their name at the end. Well last night as I said I love you Maryuri I was shocked to hear her little voice whisper… “I love you mommy” right back at me. It is the first time I’ve ever heard her say those 4 words. Up until just recently she hardly talked at all. You can imagine the tears that found their way to my eyes in that moment! My last Maryuri story is one that still brings a smile to my face as I retell it. It isn’t actually a story of a moment that I had with her as it is a new development in her world. We aren’t sure where exactly she got it but she has started to tickle you (which feels more like she is digging her fingers into your esophagus) under your chin while saying toca toca toca all while giggling up a storm. We are pretty sure it is her attempt to say get ya get ya get ya. Either way it is absolutely adorable. If you can get past the pain that the entire encounter inflicts upon you it is pretty darn cute! :)