So I promise I will get back to the Santos blog. (hopefully later tonight) However, I need to do a quick update on a little boy whom I know lots of you have been praying for. Last Saturday while the Grand Central group was here they visited the state orphanage (Kennedy.) Well while there Jen discovered that Luby was not in fact at Casitas 21 but instead was there at Casitas Kennedy. He ran up to Jen, wrapped his arms around her, and promptly started to sob. He begged her to let him return to Casa. He promised that he would listen to the rules and that he would stop hitting the kids. Jen promised to talk to our children, the adults, and the people at Casitas. Well as you know we have had a long busy week and we have not had the time to get back to the city. Jen had asked the kids what they thought and all but Yovani had said it would be fine. Yovani was actually very adamantly against the idea. Well even though we haven't had the time to return to Casitas this week he has never been far from our thoughts and prayers. Well........today God took those decisions out of our hands. I was sitting on the couch with my back to the door when I hear Jen say "are you ready for this?" Let's just say that as I turned around the last thing I expected to see was Luby standing in the doorway. However, that was the exact thing that my eyes did see. Then as my eyes began to fill with tears (big surprise that I was weepy!) I reached out for that little boy who had found his way into my heart so long ago. As he climbed up into my lap and wrapped his arms around my neck.... I lost it! I held onto him for 2 or 3 minutes just whispering into his ears that he was loved and that we wanted him. In the moments to come the rest of the story had poured out of him. He had climbed under a wall and escaped from Casitas. When we asked how he got here he held up a dirty looking Wrigley's spearmint wrapper with no gum in it that had one single word written on it....Santana. He then showed that little wrapper to every bus driver between here and Teguc and begged them to bring him here. He showed up around 6 almost afraid that we would turn him away or be mad at him. Instead we welcomed him with open arms. We then sat him down and talked to him about what was to happen. We explained that Yovani wasn't big on the idea of him returning and asked if he would talk to Yovani. We brought Yovani back to the porch and watched as Luby approached him in an attitude of humility. He told him he was sorry. He told him he would never hit his brothers again. He told him that he wanted to live here. Talk about weepy....I was gushing! Yovani then looked at him and said sure he was fine with it! So at least for the night Luby is laying his little head on our pillows in his old bed. We will be going to the city to see about bringing home a little boy who we so desperately want to be ours. So again I ask you to be on your knees. Lift this little boy up to our Father and beg Him for a changed little boy. 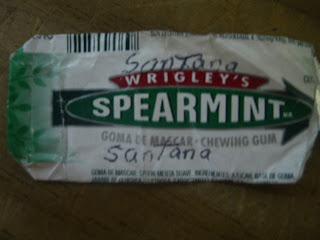 The gum wrapper that got a little boy back into our home! 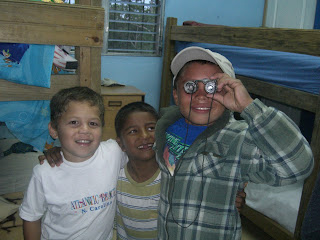 The other boys joined Luby in the bedroom to help him find his clothes and get ready and such. It was so stinkin sweet!

God is good =) He has showed that little broken boy that there is a safe place where he can be loved if he just opens his heart and lets it happen. Just like the rest of us. God will love us broken or not, if we just let it happen. Glad to hear the reunion went well. We'll be praying for you all. Hard to believe just a few weeks ago, he was trying to escape Casa. Funny how God works. Eventually, if we listen, he shows us the way home. Love you all.