Lots of you have been e mailing me wanting updates on Izzy and for what it is worth I apologize for the lack of information that I have been giving. As most of you have pointed out I have been neglecting my blog when it comes to pictures and Izzy info. Truth be told I think I was purposely avoiding such blogs. During my last trip home I missed that little girl so much it hurt. Of course I miss all of my kiddos each and every time I return to the states….but it felt different. I would literally lie in bed and ache from missing her. I missed having her curled up next to me in bed, I missed being able to kiss her cheeks and hug her close, heck I missed just watching her… be her. It was during my time at home that I was reminded that chances are good that Hondo isn’t my forever home. I’ve always felt certain that God had only placed me there until He called me to the next place. That reminded brought a new sense of pain and realization. I can call Izzy mine and I can love her like she is mine but in the end I will never be able to bring her to the states with me. She could be mine for as long as I wanted to remain in HER country… but what about when God told me it was time to move one? More than that the position of “missionary” isn’t one that comes with a cushy salary. (or any salary for that matter) If I wanted to continue caring for her and remain living/working in Honduras I would always have to make sporadic trips to the states to fundraise.  Each trip would bring with it complications of what to do with her and each trip would have me worrying that whomever she was with was caring for her properly. I knew for her sake and for my own heart I had to detach a bit. I needed to find Hondurans or a center that would see her through for life. Hondurans who would care for her and love her like she was theirs. To do so meant letting her go. Not that I won’t always love her and make sure she is being taken care of. I will always help with her medical expenses and I will always carry her in my heart.

All of that to say when I got back and found that the family I had left her with had not only gone above and beyond in the way of taking care of her ….they had welcomed her in as a member of their family. It was yet another reminder that there were people out there who could care for her. I wasn’t the only one that would fall in love with her and I wasn’t the only one capable of handling her care. Watching them love on her and take care of her was hard. Every time they held her, fed her, loved on her I wanted to snatch her back and return to my role as “momma.” Most weeks I see her at least once a week and even when every part of me wants to go back to caring for her I know it is best to leave things be.

That is my apology… I’m sorry that my distancing myself from her came out in a lack of blogs and info for all of you. I’m sorry that I failed you and her as I neglected telling you all what was going on and how you could be praying.

So I come to you today not only asking for forgiveness but prayers. I got a call Monday night saying that Izzy was sick and needed to go to the hospital….and the sooner the better. She had been running a fever, which always leads to more seizures for her. She wasn’t sleeping, eating, or going to the bathroom. She was crying nearly all the time and was losing weight rapidly. We had recently celebrated the fact that she had reached 30 pounds. (13 pounds heavier than what she was when we found her 6 months ago)

Not wanting to waste any time I told them I thought it best to take her that night so I was ready when they got there that night. I rode into the city with my Honduran entourage and prayed silently over my angel the entire trip. We reached the hospital and I stepped back as she was taken into an ER room where “only one person could be with her.” The fact that their Spanish was obviously better than mine and that they were the ones who knew all of her current information meant that I was not going to be the one going in with her. It was a fact that nearly dropped me to my knees in agony. Instead I stood in the hallway waiting for information.

In the end we found out she had an infection of some sort. She had lost 6 pounds in a matter of days and was struggling for sure. Her body was even more weak than normal and pain was etched in every feature of her little face. It is a pain that I haven’t seen her in since those first few days in the hospital. Her cry was back to the pathetic whimper that it had been in the beginning and her frail form felt all too familiar in my arms.

The doctor gave her a shot and other meds. He suggested what we could be doing and asked us to come back in a week. The fact that I would be in the states in a week registered with me slowly and broke the last of my strength. I wept silently over her as I once again realized I wouldn’t be able to care for her the way she needed me to. She would definitely get to the appointment … the Honduran family would make sure of it but I wouldn’t be there to be a part of it. Yet another reminder that no matter how much I want to be the one caring for her… I simply am not the best for her. I was once again faced with the realization that although my life felt incomplete without her in it….she would be ok without me in hers.

She has been to the hospital 3 times in 4 days. She has had all kinds of tests run and is still not improving. I know well enough to be scared for her. I hate that in her moment of sickness I boarded a plane and headed home. Yet I know she is being well taken care of. So I ask that you continue praying for her. Pray that she gains strength and weight and beats this sickness. 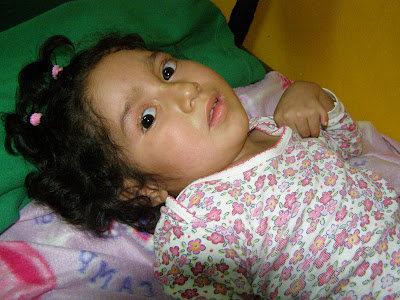 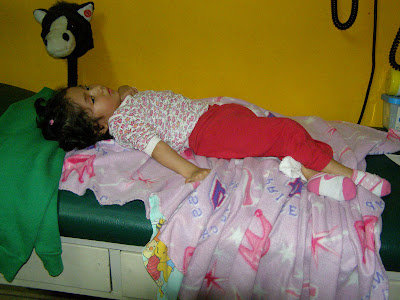