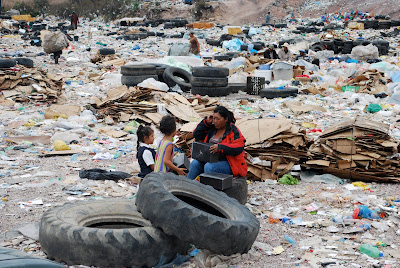 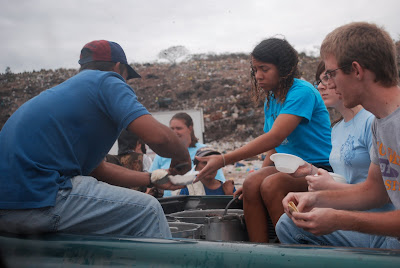 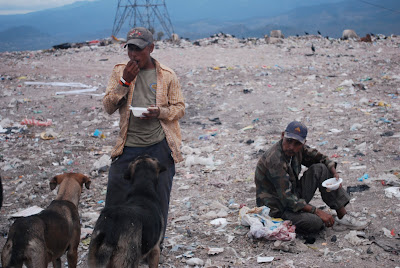 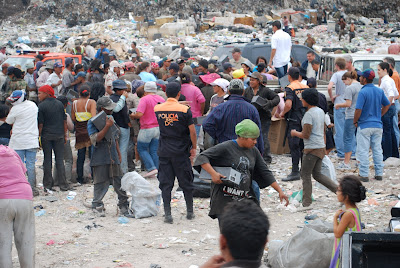 The line for shoes as people waited anxiously to get them! :) 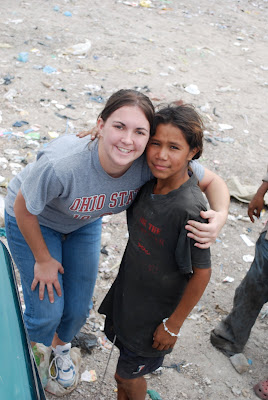 I was able to see many familiar faces while I was there.
Yesterday we headed to the dump to feed the hundreds of people that live in and around the dump. Their meals and everything else they have come from what little they can find within the trash heaps of the dump. I wish each of you could catch a glimpse of what the dump is like. Think of the hottest and most dusty place you have ever been. Now add in the worst smell you've ever smelled in your life. Oh and don't forget the multitude of buzzards, dogs, and stray cattle that are roaming in and amongst the dump. That image you have in your head still isn't close to the reality of what the dump is like and what those people live there every day.
We met up with other missionary friends at the entrance and headed in. As soon as we got inside the dump people started lining up at the back of the truck in anticipation for what we were about to give them. They received a nice sized portion of beans, rice, and two tortillas. However, I'm still convinced that their favorite part is the water. Each person gets a bag of water with their meal. Some of them even forgo the food and just take water. With as dusty and hot as it is there I can't imagine how good that water tastes. For those fortunate to get a second bag of water I often see them drizzling water over their hands and head in an attempt to cool off and get clean.
After the food was all gone we stood around chatting with some of those we had just fed. Shortly after, the Mayor's wife showed up with a truck FULL of Air Jordans. 300 or more Air Jordan's to be exact!!!! If we thought the people were excited for a bowl full of food they were 100 times more excited to get a new pair of shoes. For most of them I'm guessing this is the first new thing they have been given in a long time....possibly ever. They were carrying them above their heads, grinning like they had just won the lottery! They didn't care if the shoes were going to be too big for their feet.
It brought tears to my eyes and humbled me more than I can express. How many pairs of shoes do I have just sitting in my closet at home. When I was packing to come to Hondo the debate wasn't that I didn't have a pair but instead the debate was which pair I wanted to take with me. These people literally have NOTHING and they still delight in the little things. The still smile and laugh and joke with one another. Would I be that same way if I was stripped of everything I have? I'm afraid to answer that.
Posted by Ashley at 6:11 AM

Oh, how I remember those sights and smells! Heartbreaking, yes, but what blessings they received...and you! Praise God for people who are willing to help...even in the most undesirable places.