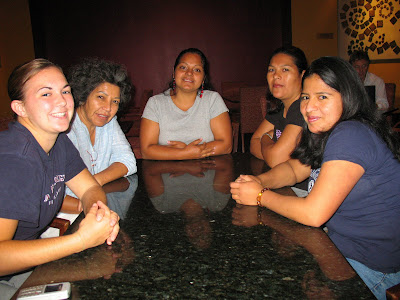 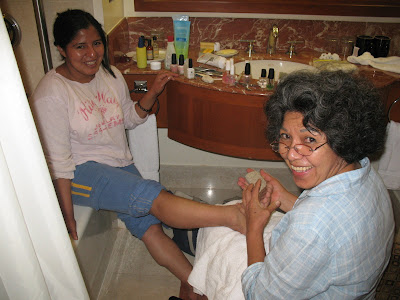 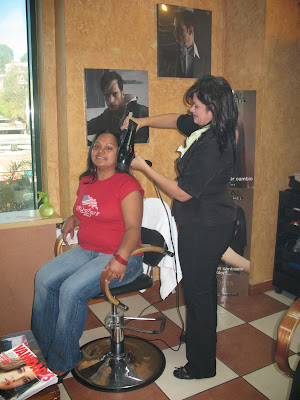 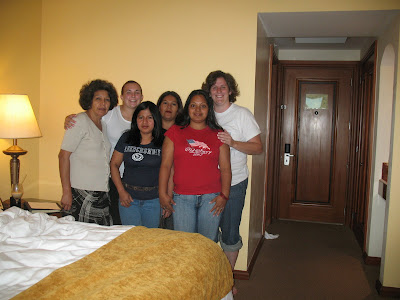 Since the day I stepped foot in this country God has continually redefined that word for me....humble. He unceasingly places something in my path that reminds me of just how blind I really am about the cushy life I lead. He opens my eyes to the way the world really looks. I'm often left dumbfounded. You know the mouth agape, tears staining your cheeks, pain in your heart kind of dumbfounded. Wednesday night and Thursday were filled with moments like that. Jen and I took our workers into the city for a "night on the town" of sorts. We had reserved two rooms at the Marriott for the evening and planned to pamper the heck out of them. What I thought would simply be a fun filled evening for all of us ended up being one of the most humbling 24 hours I've ever spent. Even the moments leading up to our night out were humbling. The girls were giddy and as excited as the kids on Christmas. They danced around Casa humming and counting down the hours until we left. As they asked questions about what to expect and discussed their excitement Dilcia said "I've always ridden by and seen it from the outside but I've always dreamed of being able to walk in the front doors." She didn't even dream of staying there for a night because that dream would seem impossible...no no just walking in the front doors would have been good enough for her. Then as we prepared to load our stuff into the car I realized that I was totting along a suitecase on wheels while they all simply had purse size bags. When I asked if they had anything else they each responded in much the same way...they had brought another shirt to wear the next day but they would wear the same jeans. Of course they would...most people here only have one or two sets of nice clothing. Here I was with a bag full of options just in case I got cold...or hot...or needed a different pair of shoes.

We set out and finally the grand adventure was beginning. I wish I could have adequately captured their expressions as they stood in awe of the place. They stared around them as if they were in another world...and in many ways I guess they were. We got checked in and headed up to the 8th floor to our rooms. The excitement and wonder of the place only grew as we walked into the room. They couldn’t believe that the entire room (which is probably the size of most houses around here) was all for them. There were questions of whether they were allowed to use the soap, shampoo, etc. that were sitting on the counter. They thought someone had forgotten it there or that they would have to pay for it if they used it. They had to be shown how to work the thermostat (which they thought was an alarm system) since none of them have ever spent the night in air-conditioning before. In all honesty they were most excited to watch t.v. and get to sleep in the next morning! It was in those first few moments in the room that one of them asked what time we would be leaving the next day. When we said 1:00 ish they spazed. They said they would have to get up early the next morning and take a bus back out to Casa because they were supposed to work. It took a few minutes of us reassuring them that it was known by all that they wouldn’t be arriving for work because they had the day off to spend with us.

We had arranged for a lady to come into their hotel room to give them manicures and pedicures so as soon as we arrived and got the girls settled in we left them to be pampered. By the time they were done it was time to eat so we headed back downstairs to the beautiful restaurant for dinner. We giggled and talked our way through dinner until every last one of us was stuffed. We had to explain that the sugar packets on the table weren’t salt, reassure them that it really was ok for them to order a fruit drink and still get a water, and convince them that they didn’t really need to clean up after themselves when they were done. It was during our dinner discussion that I came to find out that not only had they never stayed at the Marriott before but all but one of them had never even been in any other hotel. After dinner found us exploring ….we visited the pool, the gym, the sauna, the shops, and every other little thing there was to see. They remained wide eyed through it all. When we made it back to our rooms to settle in for the evening we ordered drinks for them and had them delivered to their room. They enjoyed them while lounging in their room or taking a bath. (none of them had ever had or used a bathtub before…heavens I can’t imagine!)

The next morning they slept in and then we all went back downstairs for the famous Marriott breakfast buffet! It is absolutely amazing. Once again they made over every detail. It was during breakfast that Dilcia mentioned that the bill had been slipped under the door. They had seen the total and were shocked at the cost. They were worried that they were costing too much. We reassured them that it was fine. That they spoil us daily and this was the least we could do. Believe me it was worth every penny! THEY are worth every penny. With tears in her eyes Dilcia reached over to hug me and whisper her thanks. Once breakfast was over the girls headed upstairs to the spa to have their hair done before we checked out.

I was amazed at how much of the world I’m used to is second nature. Things I’ve grown up around. We had to explain how to use the elevator, how to call the front desk for towels, how to use their key (card) to open their hotel room door, how to work the bath tub, and so much more. Things that you and I don’t even think about when we do them. We took them to the gym and showed them how to use the elliptical, treadmill, and other machines. They looked like fish out of water as they tried to walk at even the slowest pace on the treadmill.

It was an amazing 24 hours. We giggled our way through the entire thing and deepened a bond that already ran so deep. Our joke had been that they were princesses and got whatever they wanted for the entire time we were there. They took it to heart. I was struck over and over again how they had felt spoiled, pampered, and ritzy simply because they got to stay in a hotel, eat good food, and be babied a little bit. If that is the case then you and I should feel spoiled, pampered, and ritzy every day. When we take them out it is so we can “spoil them.” When we go out it is simply a get away. How is it that I got born into a family that took vacations? I saw sights and did things that our workers can only dream of. Heck I used to PAY to play volleyball. We would travel every weekend to a different tournament and a lot of the time would have to stay in a hotel for the weekend because the tournament was so far away. Hotels are second nature to me. They have long ago ceased to be a luxury and I would never consider one night in a hotel somewhere a family vacation. Yet these girls were THRILLED to be staying there and sad to leave. Their gratitude and joy will forever be embedded in the deepest places of my heart. I hope I never forget my time there with them and what it taught me about humility. Some of you may be reading this thinking what a spoiled brat I am…and you are right. I think sometimes God gives me moments like this to remind me to be thankful for what I have. When our attitudes are that of appreciation I believe God smiles down and has fun spoiling us. It was much the same way for us. Spoiling them was fun regardless but their gratitude made it all the more humbling.