So yesterday after nap the kids and I were outside playing when one of them came around front dragging a cardboard box that had been discarded. I watched as the rest of the kids came to check it out and then joined in playing with it. Thinking there had to be something great about this box I too went to investigate. As I got closer I could hear them talking, giggling, plotting, and scheming. They were astronauts loading in their spaceship. Then they were policeman catching crooks who were hiding in a box trying to get away. They jumped on the box and pinned the "crooks" to the ground. After that they were in a car heading to Teguc.....and the list goes on. They played with this stinkin box (that held no super powers or special features) for at least 2 hours. I joined in for awhile before retreating to grab my camera and simply soak in the simplicity of it all from a distance. We live in a country (USA in case anyone was confused) where kids can't seem to entertain themselves unless the device in their hands is the latest of technology and requires 4 AA batteries. They aren't interested in going outside to play and their imagination extends far enough to pretend the video game they are playing is real life. I know I'm probably exaggerating to some extent how bad things are. I'm sure some of you still have kids that play outside but I know that all of you know what I'm talking about. So coming from a world of virtual reality, computer simulated environments, and gaming watching children entertain themselves 2 hours was wonderful. They didn't need fancy toys or expensive gadgets...they simply needed a card board box, one another, and the world of make believe.

When was the last time we allowed ourselves to be so entertained by something as simple as a cardboard box? Instead of watching tv tonight take the time to play in the snow, play cards, make something, or simply dig out an old cardboard box and figure out how many different things it can become when you use your imagination. 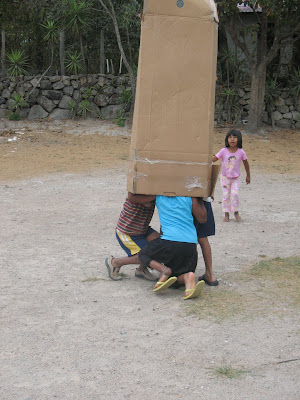 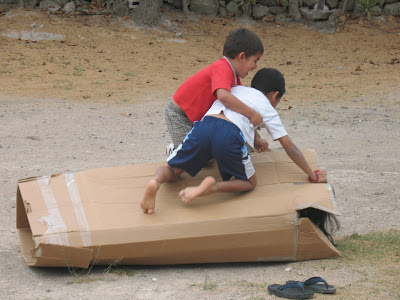 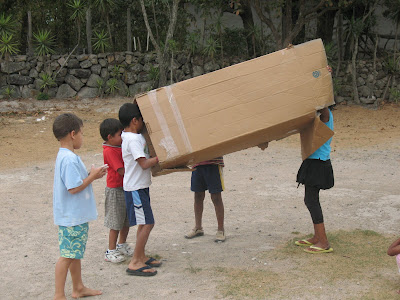