So I've decided that the moment I walked onto this property the word bored/boring were completely removed from my life dictionary. Maybe it is normal for being a momma....and maybe it just comes with living in a house of 14 + children. Whatever it is I feel like it has been so long since I've been bored that I forget what it feels like! 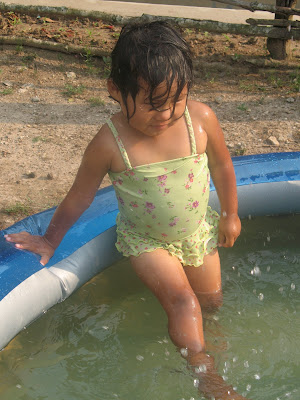 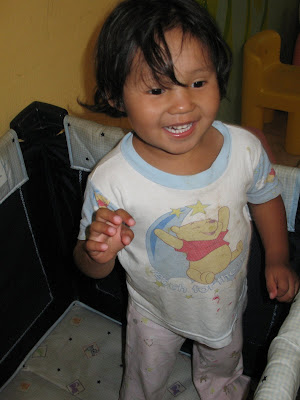 Two days ago Brayan came out of the house pulling Maryuri (who had gone inside to "pee pee") by the arm. The part of her arm that he was holding on to was the only part of her arm that wasn't covered in a white substance. From a distance I just thought it was soap and that she hadn't rinsed her hands. However, as they came closer Brayan says "mom Maryuri stole cream and was eating it ....yes eating it.... in the hallway. Somehow in the "going to the bathroom" process she got side tracked and managed to get her hands (and mouth apparently) on a tube of anti itch cream. Telling her to stand along the wall I continue talking to Brayan about it. As I turn back toward Maryuri I notice that she is licking the cream off her hands and that her once white creamy arms are now perfectly brown and clean. She had licked all the cream from her body in a matter of seconds. Knowing we best do something Jacob suggests we read the tube. Brayan ran to get the discarded tube and sure enough as we read the label it says that if consumed to seek medical attention or call the poison control center. As that information sank in I realize that we are an hour from a hospital and there is no poison control center in Honduras. Trying not to panic I sent the kids inside for milk. Somewhere in my past I learned that milk is the best thing you can give a kid if they eat something toxic. I then sent a text to a couple of people from home to get the number for the poison control in the US. I then enlisted the help of my friend Mike and got him to call the number. (It is impossible to call a 1-800 number from Honduran cell phones) While I waited to hear what he found out I pumped Maryuri with as much milk as possible. At one point Karen was plugging her nose as I poured milk in her mouth. Before long Mike let me know that the lady he spoke with said to keep her drinking but other than that there was little to be done. She also assured him (and me for that matter) that few home products have enough toxins in them these days to do much. (Thank you Lord!) I would say Maryuri ended up drinking close to 36 oz of milk before the day was over. If you have met Maryuri...miss rolie polie olie herself you aren't at all shocked that it is she who ate the cream and then kept on eating it as though it were good tasting! That child will eat ANYTHING! 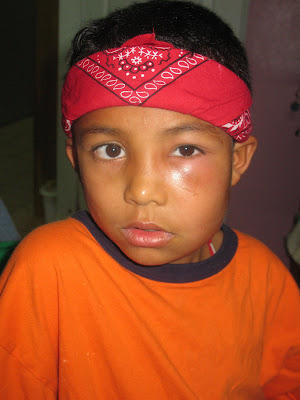 Then today the kids came home from school early....they had barely gotten through the front door when they came running saying mom you have to see Yovani. They tried to tell me he had gotten in a fight and some boy hit him. (Jacob fed them this story of course!) However, the real story came out quickly. A boy at school was throwing rocks at some bees (smart I know) and one of them stung Yovani on the face. Apparently he is allergic to bees. We didn't quite know that before but we sure know it now. I quickly went for Benadryl while Sandra (one of our workers) went for some ice. However, 12 hours later and his face still looks like the above picture. That is actually a lot better than it looked when he first got home. Depending on how he looks tomorrow we may have to go somewhere. As I said...this certainly aren't dull around here!