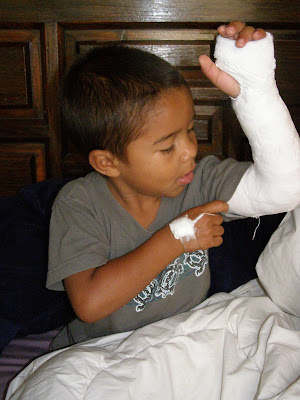 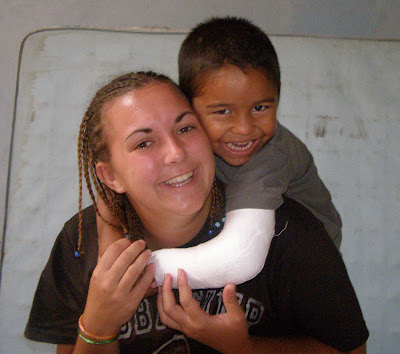 Last Wednesday we got a call from the 5 brothers saying that Francisco had fallen out of the pila and hurt his arm. They called back late Friday to tell us he had been to a doctor and the doctor thought it could possibly be broken. So Jen, David, Sam, Mike, and I drove up the mountain to pick him up. Of course we couldn't just take one of them so we loaded all of them up (including Johny their oldest brother) and headed back to Teguc. While the rest of us spent Saturday moving dirt Jen spent the day at the hospital with Francisco. We came to find out that he had broken not one but two bones in his arm and they had waited too long to get him anywhere so the bones had started to mend themselves. They ended up having to put him asleep so that they could re-break and set his arm. He is supposed to wear his cast for 4 weeks.
Posted by Ashley at 1:20 PM

you got your hair braided!!!! looking good :)